The diverse variety of philosophical subjects that I bring to the classroom greatly en­hances the students’ ability to articulate their life-experiences in more cosmopolitan ways. I teach so-called traditional philosophical authorities, such as Descartes, Hobbes, Locke, Leibniz, Hume, Kant, Hegel, Marx, Ortega y Gasset, and Sartre in my core courses; but I teach also feminist theorists such as de Beauvoir, Benhabib, Bordo, and Lugones, and I try to motivate my students to explore the undercurrents of gender, race, and class that flow underneath apparently fixed philosophical concepts. Also, in pertinent core courses and philosophy elec­tives, I introduce my students to the thoughts and worldviews of other cultures, whether they be the African traditionalism of the Ugandan writer Okot p’Bitek (about whose thought I became acquainted in my 1991 visit to Kenya), the philosophy of liberation of Enrique Dussel, the liberation theology of Gustavo Gutiérrez, Juan Luis Segundo, and Cornel West, social narratives of struggle and human rights theories of the Guatemalan Mayan Rigoberta Menchú and the African-American Malcolm X, the conceptual constructs of time and space in the (possibly) 1550s Quiche-Mayan book The Popol Vuh, the self-assured concoction of Plato’s psychology, Hegel’s phenomenology and Nietzsche’s übermenschen politics elaborated by Francis Fukuyama, or the critical postmodernism of Hardt and Negri. I believe that through my scholarship I have contributed in very positive and profound ways to the cultural and intellectual pluralism of the academic life of Le Moyne College.

THE WORLD OF THE OTHER

As Director of the Integral Honors Program, I created and designed Honors 402 (The World of the Other), the first honors course taught abroad. One of the principal objectives of the course was to teach an interdisciplinary course on contemporary issues (e.g., globalization) in the context of the social relations characteristics of a poor region of the world.

The objectives of the course were the following:

The course was guided by a desire to understand globalization and its effects on the poor of poor countries. Over 1.2 billion people live today in abject poverty, and the gap between the rich and the poor has been growing: as some countries of the so-called third world have become wealthy, a large number of their populations have become poorer. A more direct experience of some negative effects of globalization helped us appreciate better both the negative and the positive aspects of the new global conditions that have been emerging during the past three decades. The course was also designed with the purpose of showing that our relations with our “Other” need not be fraught with fear, anger, bravado, or acquisitiveness. When understanding others appreciatively is an end in itself, our relations with the world’s poor are no longer reducible to geopolitical confrontation and business connections.

In terms of cultural production, elán vital, and the aesthetic sense of life, we learned quite a bit that was worthwhile for our spiritual development. The sense of religiousness (that is, the feeling for the transcendent), and the philosophical attitude of wonder regarding the totality of the horizon and the forever-latent to that totality, are both highly developed in Guatemalan culture. The attunement to absolute alterity to which I refer, whether religious or philosophical, brings together and at times keeps separate Mayan, Catholic, and syncretistic religions and philosophies. As we opened ourselves to novelty, Guatemalan “metaphysics” proved to be quite challenging . . . and transformative.

Many students in this course found it to be a life-changing experience. 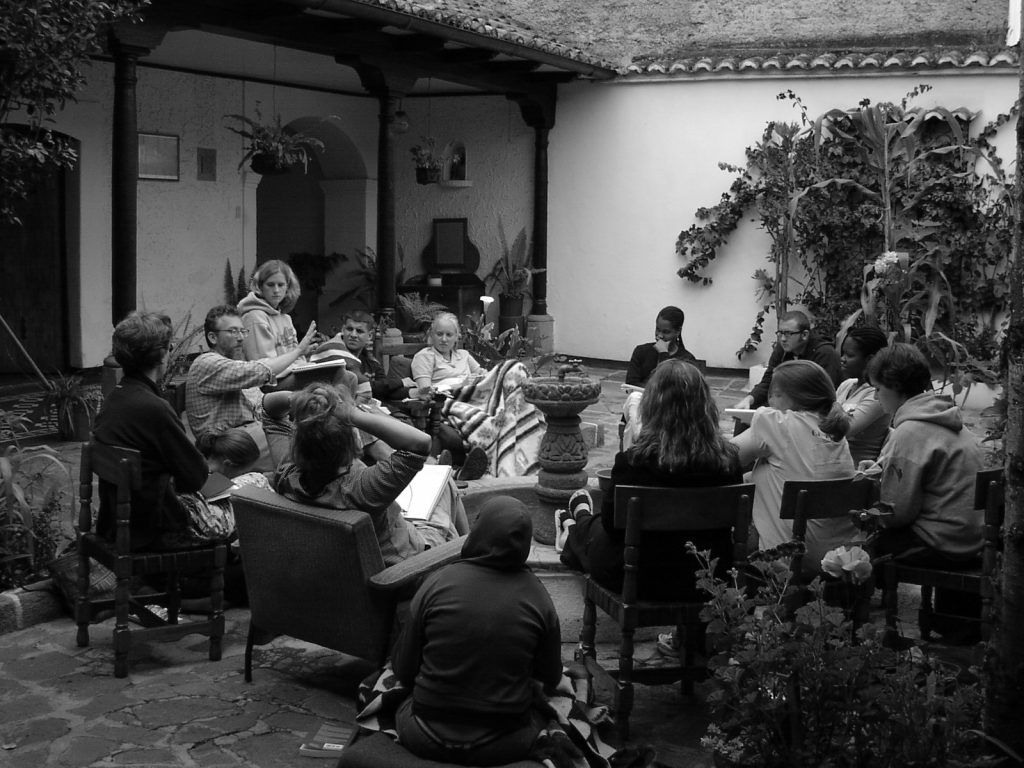 See more photos from the course “The World of the Other”